On the Insurrection of the Capitol

**This article is in response to the article published by The New Yorker entitled “The Capital Invaders Enjoyed Privilege of Not Being Taken Seriously” by Masha Gessen on January 7, 2021.

As most people, I have spent a lot of time thinking about, consuming literature and news stories about, and discussing the events of January 6, 2021. Like 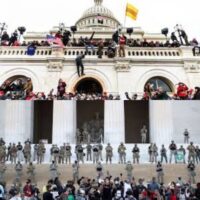 many, I am outraged and disappointed at the entire system of our government. And like many, January 6 did not start or initiate this disappointment and outrage, it confirmed it. We have all watched our so-called governmental leaders’ behavior change over the past 4-5 years. We have watched senators and representatives change their statements regarding Donald Trump. We have witnessed time and time again police officers and the justice system harm innocent Black and Brown people and instigate violence during peaceful protests; and we have heard the narratives used by politicians, officers, and journalists that degrade protestors for standing up for their rights. Throughout 2020 I heard narratives of thugs protesting; I have heard homophobic slurs towards individuals fighting for LGBTQIA+ rights; and I have heard sexist remarks towards the women fighting to be able to make choices about their own bodies and to be free from sexual harassment and abuse. And for each of these protests, no matter the number of people, police presence was noticeable, arrests were made, and action was taken to prevent and stop individuals from exercising their rights. Behaviorally we know that when one is aggressed against, they are more likely to respond with aggression. Thus, the police presence in full riot gear should not expect to have any other effect than to instigate and flame emotions and violence.

However, on January 6, 2021, we observed something very different. We observed plans taking place on social media. We observed tweets from Donald Trump encouraging individuals to travel to Washington, D.C. and “go wild”. We observed a rally where individuals were told to specifically march to the capital. We heard Rudy Giuliani say “trial by combat” to settle the election dispute that is based completely in falsehoods. To say that none of this was taken seriously because all of these individuals were seen as no more than clowns and toddlers is more loaded than I believe Gessen may have intended. Maybe they were not taken seriously. But I argue they were not taken seriously, not because they were seen as clowns, but because they were white and, in America, white people are not seen as a threat. And this is the essence of white privilege in America.

“…in America, white people are not seen as a threat. And this is the essence of white privilege in America.”

Yet while I am certain white privilege played a role in the events of January 6, 2021, it is also short-sided and dismissive to not call out the institutional practices that illustrated the institutional racism and oppression that exists in America. The riots at the Capitol building were not simply the result of individuals dismissing the harm that could result, it is the result of institutions and those in charge of the institutions not taking action – action that would have not been a second thought if those crowds were comprised of individuals of a different pigmentation. Every level within the United States government – from the senators and representatives who encouraged and continued to contest the results of the election to the police chiefs, mayors, governors, and national security heads who waited to follow the appropriate chain of command – upheld and reinforced the institutional and systemic oppression of people of color. They did this by NOT responding on January 6. They did this by not invoking their authority to stand up and speak out. They did this by sitting by complacently and allowing others to speak out falsehoods, citing their right to free speech.

We have seen different actions taken on too many occasions throughout the entire history of America. However, these actions have all been taken against those individuals fighting for rights that are equal to the white men of the country. This is not a result of not taking the rioters seriously. This is the result of white privilege and systemic oppression, and until we are willing to have the difficult conversations, we will not see change in this country.

My call to every politician, every journalist, every leader is to have the conversation. Don’t dismiss the events that occurred as superficial errors. Don’t allow narratives to be written that dismiss the incredible problems that have continued throughout our entire American history. Doing this will simply continue to uphold the oppression that has existed and will continue to exist until we are willing to dig deeper, have the conversations, and call out the injustices. It is time to do things differently. It is time to stop dismissing those who help uphold this oppressive system.

Inclusion in the Workplace

In a previous article, we discussed why diversity is so important for organizations and the errors company leaders make when focusing on diversity. Simply put, diversity without inclusion is harmful. Creating innovative, forward-thinking, successful businesses starts...
Read More

How Inclusive Are Your Work-Life Balance Initiatives?

Finding the perfect work-life balance is difficult for most people. Yet with increases in demand at both home and work, the need to find a balance is growing. Many organizations have begun to implement initiatives that increase wellness of their employees including...
Read More

Inclusion Should NOT be a Priority

Thirty to forty years ago organizations were just beginning to focus on diversity. Since then many people think progress has been made to diversify the workplace and now organizations are focusing on diversity and inclusion, and if they are really savvy, equity....
Read More